For Valentine’s Day give your sweetheart a gift that shares a story about the earliest romantic American icon who lived in Duxbury. Priscilla Mullins Alden – Mayflower passenger – wife of John Alden – and early Duxbury resident was immortalized in Henry Wadsworth Longfellow’s poem “The Courtship of Myles Standish”. Plymouth genealogist Alicia Crane Williams and essay author tells the story of “Priscilla and Her Children” in a newly released commemorative publication for Plymouth 400.

“Duxbury – Our Pilgrim Story – A 2020 Perspective” was developed by DRHS, Alden House Historic Site and Duxbury 2020.  Beautifully illustrated and photographed, the book is an essay collection of 12 local historians each with new evidence and perspectives. 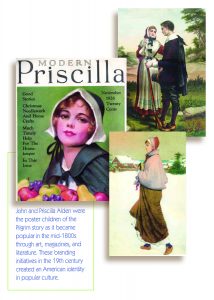 Priscilla Mullins and John Alden were 1620 Mayflower passengers and married in 1623. Priscilla was one of few women of an age to marry in the Colony and lost her entire family the first winter. Together John and Priscilla had ten children and settled on Duxbury land which remains in the Alden family today. In local records, Priscilla’s name appears only twice – on William Bradford’s list of Mayflower passengers and in her father’s will written on the day he died in 1621.

When Longfellow adapted his family’s story (an Alden descendant through his mother’s line) for the “Courtship of Myles Standish” he was already a popular American poet, famous for such heroic works as “Evangeline: A Tale of Acadie” and “The Song of Hiawatha”. Within two months of the Courtship poem published in 1858, 25,000 copies had been sold worldwide and 10,000 in one day in London alone. Artists such as George Henry Boughton who was known for painting Pilgrim events painted idealistic portraits from which thousands of prints were sold to adorn New England dining room walls as well as postcards and commercial items.