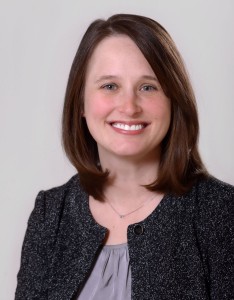 The Trustees of The Duxbury Rural & Historical Society are pleased to announce that Erin McGough has been named the new Executive Director of the Society. Erin has been the Interim Executive Director since September, when Patrick Browne departed, and in that time has done a superb job of keeping the Society moving forward while simultaneously managing the transition.

Following Erin’s appointment as interim Director, the Trustees initiated a search for a permanent Director. A search committee of seven members was formed of trustees and  members with a long involvement in the Society.  The position was advertised in many listings for non-profit and museum organizations, and personal inquiries were made to similar organizations in Massachusetts.  Over three months, almost 40 applications were received and phone or personal interviews were conducted with many of them.  Some candidates were superb, with many years of experience with museums and historical societies. Even among this strong pool, Erin clearly stood out, offering an outstanding combination of experience, vision, organization and personal skills.  She was chosen by unanimous vote of the Search Committee, with unanimous ratification by the Trustees.

Erin McGough’s work with the Society is familiar to many members.  Her exhibit on the Digging Duxbury: The Brewster Homestead’s Archaeological Past was a wonderfully engaging presentation of the archeological dig at the Brewster site, and her booklet on the dig, sent to all members, was a pleasant surprise for those unable to see the exhibit.  Highlights of the Fall season include Historic Clothing talks at the library, a book talk by William Martin, Linda Myer’s one-woman show on Abigail Adams, and the wonderful “Christmas at King Caesar” event.  As Collections Manager, Erin had previously done a great deal to organize, inventory and annotate the collections, and had put together a comprehensive policy for accessioning and maintaining the collections.  She has also been working tirelessly behind the scenes on a wide range of issues.  To help with administration and membership, she hired Lori Rohleder, who came with broad experience at the Museum of Science.  She has also dealt efficiently and cheerfully with the more mundane issues of maintaining properties, such as broken sewer lines.

Erin came to the DRHS two years ago, and has 15 years of experience in museum work.   She previously was Registrar at the New Bedford Whaling Museum, where she oversaw a collection of 750,000 objects and created both Collections Management and Emergency Preparedness plans.  She was also Registrar and Collections Manager at the Concord Museum, where she organized the collections, participated in the design and installation of 3-4 exhibits a year, and managed a half-million dollar renovation.  Erin is a graduate of The College of William & Mary and has a Masters degree in Art History & Museum Studies from Tufts University.  She received further training at the Peabody Museum, the Corcoran Gallery of Art in Washington DC, the Muscarelle Museum of Art in Williamsburg, and the Smithsonian.

The Trustees feel that the Society is exceptionally lucky to have such an accomplished and capable director, someone who can lead the Society into a new era as we expand our mission to include the issues that matter to a diverse membership.  Please welcome Erin as our new Director, and please come to a Society event and get to know her.  You will find that the Society is in very good hands.