The DRHS Historic Houses open for the summer season during the weekend of June 28, 2014. 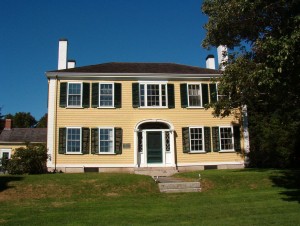 This Federal mansion was built in 1809 for Ezra Weston II, known as “King Caesar” for his worldwide preeminence as a shipbuilder and merchant.  Weston’s enterprise dominated Duxbury in the early 19th century with a large portion of the population employed in the Weston shipyards, farms, wharves, mill, ropewalk, or aboard Weston’s fishing schooners and merchant fleet.  Ezra Weston’s ship Hope, built in 1841 was then New England’s largest vessel.  Purchased by the Society in 1965, the house is presented for tours as it appeared in the 1820s.  The house is noted for its rare French scenic wallpapers, portraits of sea captains, and 19th century furnishings.  Two galleries feature rotating exhibits.

Caesar’s Family Croquet: all season long at the King Caesar House. Two playing courts will be available for casual play for visitors to the house museum. Families welcome. FREE with house admission.

Treasure Hunts at King Caesar House: all season long at the King Caesar House. Children will be given a treasure hunt, and asked to look for special objects and motifs inside the house. FREE with house admission; recommended, but not limited, for children from ages 6-12. 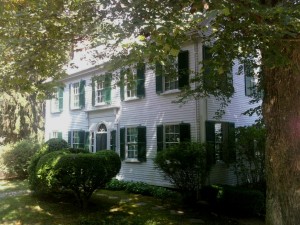 Sarah Hickling Bradford supervised the 1808 construction of this Federal-style home, while her husband, Capt. Gershom Bradford, was held captive by the French. This dramatic beginning was the start of a lively and full household in which the Bradfords raised their young children and maintained an extended family. For the next 160 years, the house remained in the Bradford family until it was donated to the Society in 1968.

The Bradfords were descended from Pilgrim William Bradford and were prominent members of Duxbury society. During the 19th century they were active in many of the social movements of the day, including anti-slavery and temperance. Indeed, all four Bradford daughters raised in the house were accomplished women: Maria was an educator who married the abolitionist minister, Rev. Claudius Bradford; Elizabeth was a painter and amateur botanist; and Lucia and Charlotte were both Civil War nurses.

In addition to the original furnishings on display in the house, the Bradfords also preserved thousands of letters, log books, journals and other documents, making them one of the best documented families in Duxbury. Their stories, both particular to the family and yet universal to the time they lived, are told against the backdrop of this unique house.