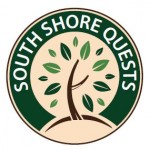 South Shore Quests is a non-profit organization formed in 1998 to encourage awareness and appreciation of South Shore landscapes and historic sites. Questing involves using a map and hints to locate a hidden quest box containing a stamp or guest log. All South Shore Quests are based on outdoor exploration directed by clues that weave historical, cultural, and environmental facts into a treasure hunt that’s as fun as it is informative.

The DRHS properties are the first Duxbury sites to be included in South Shore Quests, which annually publishes a $5.00 guide to roughly fifteen Quests, spanning towns from Pembroke to Braintree. Questers who complete six or more Quests are eligible to receive a South Shore Quests Patch. The King Caesar House Quest will appear in the 2016-2017 booklet. The Nathaniel Winsor, Jr. House Quest is accessible on the South Shore Quests website, as a free demo Quest.

More details about South Shore Quests, including purchase instructions, may be found at http://www.SouthShoreQuests.org. Note: the Quest season runs each year from April 15 to November 15. A limited quantity are available at our office at 479 Washington St ($5).

A special thank you to Karen Bellinger Wehner, Historical Archaeologist and DRHS Volunteer.