Dinner plate, “Signing the Contract in the Mayflower” 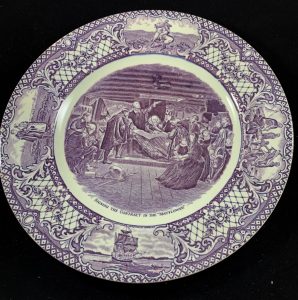 The Crown Ducal “Colonial Times” dinnerware was produced in the late 1920’s and early 1930’s as a collective set of twelve, all depicting a variety of famous scenes of early American history. This plate, “Signing the Contract on The Mayflower” features four scenes of Pilgrim history on the edge including: “Mayflower in Plymouth Harbor,” “Return of the Mayflower,” “American Indian,” and “Pocahontas Saving Life of John Smith.” The back of the plate depicts the scene “Pilgrim Exiles.” All of the scenes were derived from well-known illustrations and engravings of the late 19th century, the main one painted by Edwin White (1817-1877), and engraved by George E. Perine (1837-1885) around 1857.