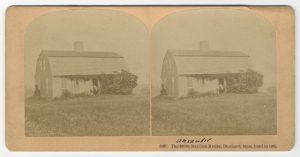 Stereoview of the Standish House, circa 1900
A.S. Burbank
Plymouth
Silver gelatin print on board
Gift of the Plymouth Antiquarian Society

Stereoviews, or stereoscopic images, were almost identical photographs, set side by side. When viewed through a stereoscope, the image appeared three-dimensional. They became a common souvenir item, like post cards, depicting popular scenes and locations.

While this stereoview claims to be of the “Myles Standish House,” it is in fact, the home built by Standish’s son, Alexander Standish. The misidentification of this house persisted until the latter half of the 20th century. 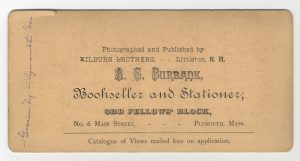