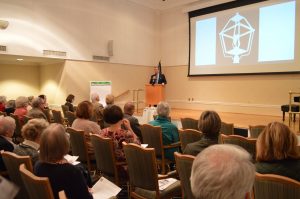 The DRHS held its 2019 Annual Meeting on the evening of Tuesday, February 4, 2020. Attendees listened to reports from the Board President, Treasurer and Executive Director. New Trustees were elected, outgoing trustees were honored, and volunteers received Volunteer Awards. The business meeting concluded with a brief presentation by DRHS Historian Carolyn Ravenscroft, on a recent conservation project. Afterwards, there was an optional sit-down dinner. The Annual Meeting is a chance to reflect on the successes of 2019 and to look forward to 2020.

Mary Wood (Woody) Lawson was elected for a term expiring in 2023. Woody and her husband, Sam, moved to Duxbury in 2002 where they had summered since 1981. Woody has also been involved at the Duxbury Art Association, St. John’s church and the Duxbury Yacht Club where she has chaired several committees and is a certificate member. Woody is from North Carolina and a graduate of the University of North Carolina.  Woody has been active in her two daughters’ schools, ranging from Girl Scout Leader to co-chair of the Parents Association at Noble and Greenough School, a position that was ex-officio on the Board of Trustees. Other board experience includes:  Junior League of Boston, South Shore – new member chairman; South Shore Natural Science Center, Norwell – auction chair; Duxbury Bay Maritime School – responsible for expanding Clifford Hall as a wedding/meeting/event venue, auction chair; Duxbury Garden Club – committee chair of Maxwell Garden (continuing), President (2017, 2018, 2019). Woody is a longtime member of the DRHS and has worked closely with the Reynolds-Maxwell Garden and has also been involved with KCH Christmas and the Summer Tea Party.

Drew Strawbridge was elected for a term expiring in 2023. Raised in Duxbury, Drew and his wife Christy have long been involved with DRHS events through their love of Cedarfield and Clark’s Island. A realtor by profession, Drew has a deep background in sales and training, which he brings to the DRHS as Chair of the Membership Committee. An interim trustee since 2018, Drew is now being proposed as an elected Trustee.

David Uitti was elected for a term expiring in 2023. David took over as Interim Treasurer in November 2019 and is now being proposed as an elected Trustee. David is a partner at Mirrione, Shaughnessy & Uitti law offices, where he specializes in civil litigation at both the trial and appellate levels, with an emphasis on condominium, construction, real estate, and land use matters. David’s family has been involved with the DRHS for many years, and he lives in a house that will soon be Dateboarded by the DRHS!

Scott Casagrande was nominated for a term expiring in 2023.

At a recent meeting of the Board of Trustees, Peter Rapelye was elected Vice President and Drew Strawbridge was elected Clerk.

We say goodbye to long time Board Member and DRHS Trustee, John Bear, under whose careful guidance the DRHS has prospered and grown stronger. John’s cheer and calm navigation will be missed, but we are very glad to have had him for such a long time.

We are also be bidding goodbye to stalwart Board Member and DRHS Clerk, Bill McArdle. In addition to serving as Chair of the Publications Committee, Bill has been the DRHS representative at the Local Historic District Commission. He will continue on in both of these efforts, but we wish to warmly thank him for his service.

Lands & Gardens: Duxbury Garden Club, an organization that has partnered with the DRHS for decades to help maintain gardens at the King Caesar House and the Reynolds-Maxwell Garden. The DRHS is grateful for this ongoing partnership and for the care that they deliver to their community every day. Their efforts beautify not only our properties, but various other spots around town, and we are consistently impressed by their willingness to work outside regardless of the elements.

Preservation: Pat Loring, who works primarily with the Lands Committee. In our 2019 Strategic Plan we specifically designated our Lands Portfolio as a “collection” owned by the DRHS, subject to the same ethical and professional decision making that is afforded to any of our museum, building or archival collections. Pat has taken this directive to heart, and has poured countless hours into the Lands Committee, most recently helping us to draft conservation restrictions for a number of properties in our lands portfolio. When they are recorded sometime this year, the conservation restrictions will provide a high level of protection for these important landscapes in Duxbury.

Education: Rachel Ezell, who brings to our school programs nearly 20 years of professional experience in the field of education. She has worked to learn the history that we teach to Duxbury schoolchildren on their annual visits to King Caesar House and the archives, and she has given a great deal of time to attending the visits and presenting the materials. This fall, she also shared her sewing expertise with the DRHS in creating a new map for our “Village Evolves” program, which is an annual tradition for all Duxbury third graders. For all she has shared with our organization thus far, and because she has expressed excitement for taking on new projects in the future.

Activities: Tony Kelso, Town Historian, is well-known to many at the DRHS, but this year he delivered a series of stellar programs at DRHS: first, with his neighborhood walk in Lower St. George Street; followed by his History/Lands walk with John Galluzzo at Round Pond; and, wrapping up with his fantastic presentation on Duxbury’s Prohibition history at our Speakeasy Night in October. In addition to these programs, he contributes to the Education Committee and to the Dateboard Program, and, remarkably, he is always working to create exciting, new programs.

New Volunteer Awards: Madeline di Palma and Maya Stahl, a pair of new volunteers from Duxbury High School who came to the DRHS as Tour Guides last summer. Working together and separately, they helped to be ambassadors for the DRHS with the many people who visit during the summer season. They have helped at other programs too, including contributing a boat maker’s space for children to enjoy during Stories By the Sea this summer and volunteering for both Holly Days and Christmas at King Caesar House. We thank them warmly for their help, and we look forward to the ways that they will contribute in the future.

New Volunteer Award: Brendhan West, who has helped in a variety of ways over the past few years. Generally someone you can call on for anything, from helping to set up and take down events, to working with school children on field trips, to having fun with our youngest visitors at family programs, to recruiting new volunteers and generally drumming up enthusiasm for all that we do. Brendhan is truly the type of volunteer and member that all organizations wish for.

DRHS Volunteer of the Year 2019: Mary Alisa Sherman. Mary Alisa has a very long history with the DRHS. She has served for years as one of our most devoted Tour Guides and has helped with a multitude of programs, including acting as Co-Chair of Christmas at King Caesar for several years. In recent years, she has become one of two specially identified Tour Guides to take on private bus tours, and we often call on her to give other types of private, high-stakes tours, trusting her to represent DRHS admirably, as she always does. Mary Alisa has worked on school programs and field trips. She helps to fill the docent & volunteer schedule for Christmas at King Caesar. She has baked us cookies, set up tents, pulled more than her share of the load, and is an exemplary example of what volunteerism at DRHS can look like. Thank you, Mary Alisa.

The DRHS warmly thanks everyone at all levels who helped to make 2019 successful and we look forward to 2020, together.