In Memory of Robert Hale 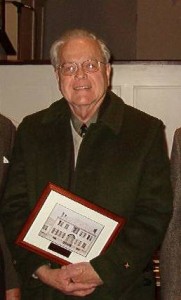 It is with deep regret and sorrow that we note the passing of Robert (Bob) Hale, one of the most important contributors to the DRHS in many years. To call Bob a contributor does not do any justice to his hard work, since over the years he was a past president of the Society, a long term trustee, head of the Bylaws Committee, and perhaps most satisfying to him and important to DRHS was Bob’s long term and passionate leadership of the Collections Committee.

During Bob’s tenure DRHS acquired many “things,” small, large, important and ephemeral, for the collections. It is because of these multifaceted accomplishments that the rotunda in the Drew Archival Library at the Wright Building is dedicated to Bob Hale and his hard work for DRHS. When Bob finally stepped down from the Collections Committee he wrote, “I plan to continue poking, doing research, trying to find out more about the provenance of pieces. And I will continue searching for treasures that have historical meaning for Duxbury.”

Bob Hale was a force of nature, a generous force of nature. He arrived by serendipity in Duxbury in 1950 as an actor of the newly formed Duxbury Playhouse. He never truly left, even though in subsequent years he may have lived in many different places after his original time in Duxbury. He returned to Duxbury in the 1980s to rejuvenate and revitalize Westwinds Bookshop, and used his considerable clout in the world of authors to bring them to Duxbury, even after he passed on the ownership of the store.

Bob and his wife Lydia (Lyddy) were a team that could do anything together, from running a small farm from their home in Pembroke, to throwing a dinner party for forty, to knowing the Duxbury resident who was ready to give their treasures to the DRHS for safekeeping, and they did it with seemingly effortless joy and lots of humor. Recently I was catching up reading a back Yankee Magazine article about the town of Cabot, Vermont and the school children who created a series of maps of their hometown showing their personal landmarks in the town. One of the children was Gage Hale, Bob and Lyddy’s grandson, who put on his map an old Westwinds Bookshop sign hanging on his barn. I realized then what Bob Hale gave his grandson, his family, and all of us, was a true sense of place.

Bob Hale loved his adopted hometown of Duxbury- its landscape of marshes, beach, woods and fields and its older buildings that fit so well into this landscape. And he was not afraid to speak out when he thought that beloved landscape was threatened. But Bob also gave us the people in that landscape. He gave a series of standing room only talks at DRHS of his reminiscences of the characters he encountered in Duxbury when he first arrived here. Bob was a wonderful storyteller and he always found the humor and quirkiness that would define that person in that place, no matter if that person were a famous author or a local character. Whether he was sweet talking someone out of a treasured Duxbury painting that he thought the DRHS should take care of, or just getting someone to volunteer to take over a task, Bob Hale had a way with words that could make that person realize how much their effort would help Duxbury as a whole.

Bob Hale’s lasting legacy to all of us is that sense of people’s humanity in their local landscape, and how it defined a sense of place. This was true whether he wrote or spoke of his childhood home in upstate New York, the glittery world of authors and the American Booksellers Association, the various bookstores he owned or ran over the years, or most important to us; Duxbury and Pembroke. As people, a Society, and a town we are all the more richer for knowing Bob Hale and his never ending search for treasures that gave him and us a profound sense of place.