Letter from the Board President: 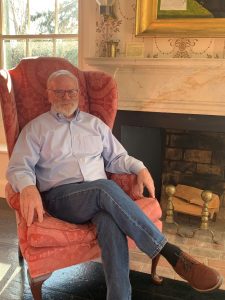 I am writing with an update on our progress in finding a new Executive Director of the Duxbury Rural and Historical Society. We are delighted to announce that we have hired Jim Hartford as an Interim Director effective January 18.

Jim is a lawyer with a long history with the DRHS. He has served on the DRHS Board of Trustees  from 1989 to 2002 and a second six year period in the 2010’s.  He has twice been the President. Starting with the acquisition of the Nathanial Winsor Jr. House, he implemented important strategic, financial and organizational advances and led the Society into a long period of significant growth and innovation.

Jim also has experience with nonprofit Interim Directorships managing the Atlantic Symphony Orchestra in that role.

Those who know Jim have the highest regard for his ability, integrity, thoughtfulness and dedication to DRHS, leading with inclusiveness and working with members, staff and volunteers, properties and resources. He will energetically keep the DRHS moving until we have a permanent Director.

The search for a new Director has started. We have formed a committee and are currently considering the next steps and procedures.

We thank you for the support you have given us over many years.  Your continued membership, financial contributions, and volunteerism are what makes this organization so vibrant, successful and vital. The Annual Meeting is February 1. We hope you’ll sign up if you haven’t yet.  It will be virtual, as it was last year, and you will all have the opportunity to meet Jim.

President, Board of Trustees