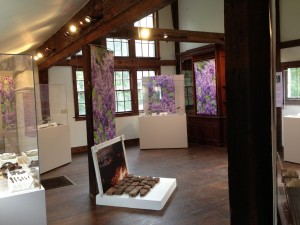 We invite you to visit the King Caesar House Museum, tour the house and view our exciting new exhibition, “Digging Duxbury: The Brewster Homestead’s Archaeological Past.” The King Caesar House opens for the summer on Saturday, July 6 at 1 pm. Thereafter, the house is open Wednesdays through Sundays, 1-4 pm.

In the fall of 2012, the Duxbury Rural and Historical Society conducted an archaeological testing procedure on the site of the Elder William Brewster homestead. The Society has owned the lot, known as the “Brewster Lilacs,” off of Marshall Street on Standish Shore since 1948. It has long been known as the location of William Brewster’s first house in Duxbury. Prior to the dig, an old foundation and well were clearly evident in the ground. Some historians have argued that this foundation is that of Elder Brewster’s first house, dating to about 1634. Others have argued that it is a later foundation, perhaps belonging to a house built by one of Brewster’s descendants, or that it belonged to a house built by the Soule family, who purchased the property in 1773.

The primary purpose of the 2012 dig was to determine the age of the foundation and whether it was indeed Elder Brewster’s first house. The dig was overseen by certified archaeologist Craig Chartier, director of the Plymouth Archaeological Rediscovery Project. Over 100 volunteers brought their enthusiasm and labor to the project, weathering the effects of one hurricane and one nor’easter. In the course of 12 days these volunteers contributed over 75 hours, digging, hauling, sifting, and sorting artifacts from 52 square meters of land.  A total of 17,675 artifacts were recovered. We hope these volunteers and all members of the Society will join us in celebrating the results of the dig which are presented in the new exhibition.

Viewers will learn about the various inhabitants and uses of the property. These range from Native Americans who used the site as early as 6,000 years ago to the early 20th century when the site served as a refuse heap for the grand Myles Standish Hotel which stood nearby. Artifacts carefully selected will represent five different eras of occupation.

The ultimate conclusion of the dig, as supported by the evidence unearthed, is that the foundation at the “Brewster Lilacs” belongs to the c. 1634 house built by William or Love Brewster. Further, the original house was likely modified and added on to by later Brewsters, as well as the Soule family who subsequently owned the property, and therefore may have been continually lived in from c. 1634 until the house was removed about 1865. Artifacts discovered and the nature of the foundation strongly support the notion of 17th century construction and occupation.

The dig was immensely successful in answering the original questions posed by the Society and researchers, and in turning up evidence from every era of occupation on the site. The Brewster Homestead has high research potential to provide information on pre-Colonial Native American life, early Plymouth Colony homes, and everyday life in 18th and 19th century Duxbury.

We hope you will join us for the exhibition opening to find out more about it.