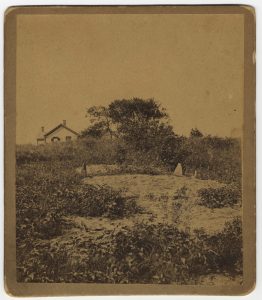 This early photograph of the Myles Standish grave marker was taken before the construction of the more elaborate grave decoration featuring cannons at the Old Burial Ground.

Oral tradition in the Hall family of Duxbury, descendants of Standish, recalled that the Captain’s grave was marked with two pyramid shaped stones. When Melzar Brewster, hired by the Duxbury Rural & Historical Society, discovered these stones while clearing the old burial ground of brush and debris, they served as possible proof that the grave of Myles Standish was discovered.

The Myles Standish Burial Ground (also known as Old Burying Ground or Standish Cemetery) in Duxbury, is considered one of the oldest maintained cemeteries in the United States. Several well-known Pilgrims who arrived on the Mayflower in 1620, including Captain Myles Standish, John and Priscilla Alden, and George Soule, are buried here. It was also the site of Duxbury’s first and second meeting houses, in use from approximately 1638 until 1789. The burial ground was abandoned until it was reclaimed in 1887 by the Duxbury Rural Society, at which time Standish’s grave marker was discovered. After two exhumations in 1889 and 1891, it was generally agreed that Standish’s remains had been located and a memorial was built over his gravesite. The Standish gravesite memorial is today the most prominent feature in the burying ground. For more information on the artifacts discovered at the exhumations, see Digging Duxbury. 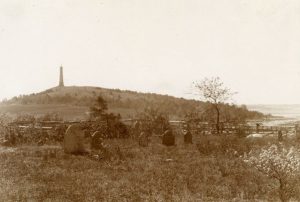 This photograph shows the Old Burying Ground along Chestnut Street in Duxbury. The Standish Monument atop Captain’s Hill can be seen in the distance. The Myles Standish memorial with cannons at his gravesite, installed in 1893, is not visible from this angle.