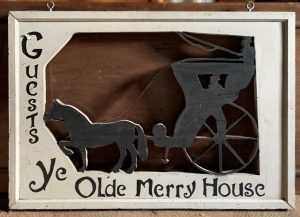 In 1934,  John Nilson, a Swedish immigrant, and his wife, Hansine, of Norway, purchased 500 Washington Street. For over twenty years, Hansine was responsible for the management of their inn, Ye Old Merry House, assisted by her daughter, Edna. The inn’s name had a folksy ring to it, but it may have also referenced two former owners of the house, Canadian brothers, Hortense and Thomas Merry.

Although attracting a clientele who were eager to visit to the town’s historical sites, Hansine decorated the inn’s dining room with Swedish stencil work and served authentic Scandinavian fare – an interesting juxtaposition of both old world and new; immigrant and “American.”

Hansine Nilson was one of a number of women who ran businesses in Duxbury during this time, but it is all the more remarkable considering English was not her native language and both she and her daughter were deaf. 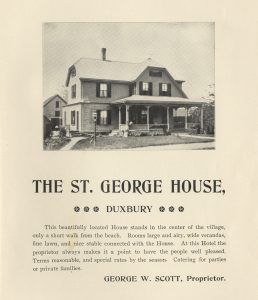 The St. George House Inn and restaurant was located at 576 Washington Street. It was owned by George W. Scott and his wife, Louise. This very successful hotel was one of the only Duxbury businesses operated in the 19th century by a Black couple. Their clientele included summer visitors, but also locals, for example the third meeting of the Duxbury Yacht Club was held here. The Scotts operated the hotel for almost thirty years, c. 1890-1926. After their tenure, it became the Waycroft Inn.

George W. Scott was born c. 1846 in Virginia. After the Civil War he lived in Pennsylvania where he met and married his wife, Louise Goynes. Their daughter, Maude, assisted in running the family business.

Go to Next Section: Collecting in a Pilgrim Town