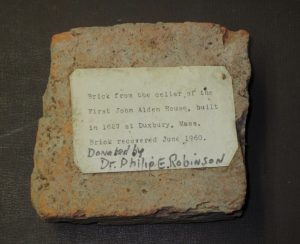 This fragment of brick, donated to the Duxbury Rural and Historical society in 1963, has a tag that reads “Brick from the cellar of the first John Alden House built in 1627.” In 1960 the Alden Kindred Foundation hired archaeologist Roland Robbins to explore the homesite of John and Priscilla Alden. He discovered a granite foundation and deep cellar hole which yielded over 9,000 artifacts both historic and prehistoric.

The Alden House Historic Site is located at 105 Alden Street in Duxbury, on land granted to John and Priscilla Alden in 1627. The house currently on the site was believed to have been built by the Aldens in 1653. In 2003, dendrochronological and architectural analysis of the structure suggests that it was built circa 1700 by the children and grandchildren of John and Priscilla.

Learn More about the Alden Family.