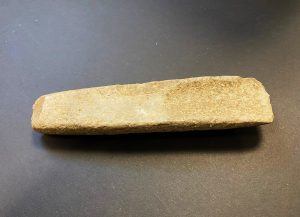 Hornfel stone, possibly from the Blue Hills quarries outside of Boston.

When the European settlers arrived in Plymouth, and later in Duxbury, they benefited from the legacy left by the previous residents, the Wampanoag: cleared and cultivated lands suitable for living and farming. This gouge, recovered in 2012 during an archaeological dig on the site now known as the “William Brewster property” in Duxbury, is evidence of thousands of years of Native Americans living in the Duxbury area, prior to European settlement.

The Late Archaic era (6000-3000 BP or “before present”), from which this gouge dates, accounts for the most identified archaeological sites in Massachusetts, possibly because there was a dramatic increase in population at the time and a corresponding proliferation of stone tools.

During the Contact Period (1500-1620) in Southeast Massachusetts, where the Wampanoag Nation lived, it is estimated that there were 50,000 to 100,000 people in about 67 different villages. However, by 1620, when the Pilgrims arrived in Plymouth, the Native American populations had been decimated by a recent epidemic introduced by Europeans, with mortality rates as high as 100% in some communities. Native American culture and power hierarchies were forever altered as a result of this sickness, making them susceptible to the colonization and cultural injustice brought by the settling Europeans.

A total of 100 pieces of prehistoric cultural material were recovered from across the site with an assemblage that ranged from pieces of fire-cracked rock (the result of having been in a cooking or heating fire for extended periods of time) to the left over pieces of stone from making tools like scrapers, spear points, and arrowheads. The dig also recovered this one, complete gouge.

The site is one of the few Wampanoag sites recorded in the Nook area of Duxbury. The geographical area is notable because Captain’s Hill rises 170 feet above sea level and is one of the highest points in coastal Massachusetts. Duxbury was known as “Mattakeesett” and boasted an abundance of fresh water (1,149 acres today), extensive mudflats, and over 3,000 acres of wetlands. These features made the area an ideal location for seasonal or year-round settlement.

Duxbury’s Wampanoag population would not recover – throughout the intervening centuries, only a handful of Native Americans are documented as returning to live in the town. The Wampanoag Nation, however, continues in Southeast Massachusetts. In the words of Paula Peters, Mashpee Wampanoag Tribe Member & Scholar, “Thus, we pay tribute to all people who have lived in Duxbury, especially the Wampanoag Nation who have been here for at least 10,000 years and who live here still.”*