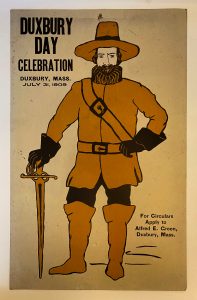 Duxbury Day took place on July 31, 1909. It was initiated by the Standish Association to raise funds for the upkeep of the Myles Standish Monument. According to one account, thousands flocked to Duxbury for the day. Among other events planned, local descendants participated in a grand historical pageant to celebrate the landing of the Pilgrims.

“Duxbury Days” later became the name for the annual mid-20th century Fourth of July Weekend celebration, not related to the original 1909 event. 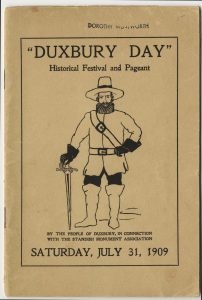 Programs like this one were available to those attending the festivities of the Duxbury Day celebration. Inside was a schedule of events, as well as advertisements for local vendors. The cover art of Myles Standish was used prominently in the marketing to raise awareness of the efforts of the Standish Association to maintain the Monument.