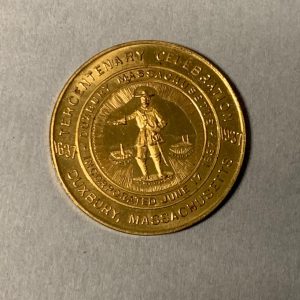 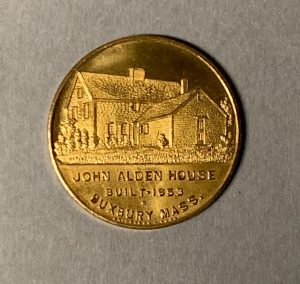 Coming on the heels of the grand celebration of the 300th anniversary of the landing of the Pilgrims in 1920, Duxbury commemorated its tercentenary birthday with a similar albeit smaller scale in 1937. It capitalized on its own Pilgrim legacy by showcasing its historic sites and creating granite markers to memorialize places such as the homesite of Myles Standish, the Brewster Lilacs, and the site of the First Meeting House. This commemorative medal (or coin) features the Myles Standish Monument and  the John Alden House, sites relating to two of the most popular Duxbury Pilgrim founders. 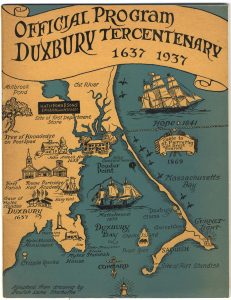 The multi-day tercentenary festival occurred from July 3-5th in 1937, and included parades, baseball games, foot races and more. Programs, like this one, would highlight the course of events throughout the weekend and feature local ads especially for hotels welcoming guests for the tercentenary. In addition to public events, Pilgrim related homes were open to visitors. These included the Alden House, the Standish House and the Gershom Bradford house, the latter two of which were still privately owned.

The Tercentenary committee chose to use the map created by Beulah Locke Sherbourne on the cover of the celebration’s program. The original map is an interpretation of the shoreline of Plymouth, Kingston, and Duxbury featuring popular tourist sites, or historical moments in the three towns’ histories. Beulah Locke Sherburne (1888-1942), an artist and designer, lived in Lexington, MA but summered for many years in South Duxbury. 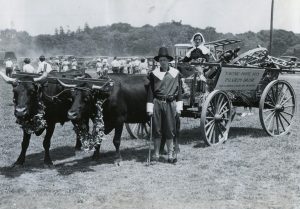 During the Duxbury Tercentenary celebration included a parade on July 5, 1937. Many of the floats depicted historic events in the towns history. The Duxbury Garden Club’s entry shows a newly married Pilgrim couple portrayed by Russell Belknap and Ruth House.