Logbook of the “Pilgrim” 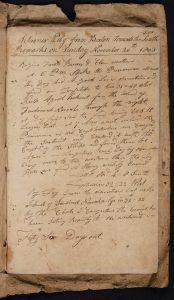 There were at least three Duxbury vessels built in the 19th century with the name Pilgrim. This log belonged to Capt. Samuel Delano, Jr. (1769-1853), who was not only the captain, but also the builder. The log is an important record of the seal-skin trade of the early 19th century.

The Pilgrim was built by Samuel Delano, Jr. to sail in tandem with the larger, Duxbury- built Perseverance, captained by Samuel’s brother, Amasa Delano. The vessels embarked together on a sealing voyage. Seals were caught off the southern tip of South America where their skins prepared for the lucrative trade in China. While separated from the Pilgrim, the Perseverance was involved with the re-capture of a slave ship, the Tryal. This event was later fictionalized in Herman Melville’s novella Benito Cereno.