In 1837, when he was 30 years old, George C. Prior married 25-year-old Caroline Winsor (1811-1906). She was born in Duxbury, the daughter of Capt. Martin Winsor and Hannah Rogers. The first Winsor to come to Duxbury was Caroline’s great-grandfather, shipbuilder Samuel Winsor. By the time Caroline was born, the Winsor family was both large and prosperous, with many members living along Washington Street. Caroline was one of five siblings. 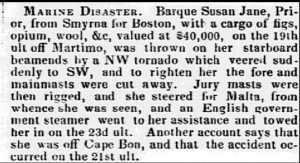 A year after their marriage, Caroline gave birth to the couple’s only child, Gertrude Winsor Prior (1838-1919). George was away at sea much of the time. He spent many years as a mate, including on the Sarah Parker and Smyrniote. He eventually attained the rank of master mariner. On at least one voyage in 1848 to Smyrna (Izmir, Turkey), both Caroline and 10-year-old Gertrude joined Capt. Prior aboard the barque Susan Jane. The ship reached Smyrna with no incidents, loaded its cargo of figs, opium, and wool, and started for home. In mid-October, it was swept up in a terrible storm/tornado and dismasted. All hands and passengers survived, but the ship had to limp to Malta for repairs. It eventually arrived in Boston on February 14, 1849. Did Caroline and Gertrude return to sea? At this point, it is unknown. Capt. Prior, however, continued to have a successful career for many years.

In 1851, the Priors purchased a vacant lot on Washington Street and built their lovely Italianate-style house. Duxbury’s shipbuilding had waned but men like Prior continued to be sea captains aboard Boston and New York built clipper ships. It is clear from the size of his new house, that Capt. Prior was prosperous. By 1855, their household included a domestic servant, Joanna Folly [Foley] from Ireland. She was one of many Irish who emigrated to America during the Famine years and found employment in Duxbury.

The painting of the Susan Jane in that devastating storm was donated to the DRHS by Capt. Prior’s daughter, Gertrude. She married John Hollis and operated the Hollis House at 6 Fort Hill Lane.

Description of donation by Gertrude Prior Hollis