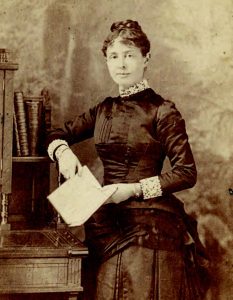 Catherine “Kate” Wilde (1844-1917) was born and raised in Duxbury at 45 Cedar Street, in the house built by her grandparents, Capt. Jonathan and Zilpah (Drew) Smith. Her father, James Wilde, was the town’s doctor. But, most importantly for our story, Kate’s aunt was Judith Winsor Smith, a staunch and well-known suffragist.

As a child, Kate most likely attended the public Point School that stood over a spar soak on Powder Point Ave and was the home of the first Student Government in the country. She may have also spent some time at Partridge Academy, the local co-educational private school, founded the year she was born. Family letters indicate, however, that she was away at school in Boston by 1861, boarding with family friends. Her education went no further, for college in mid-19th century America would have been out of the question; there were only a handful that accepted women.

Although she wished to nurse during the Civil War, she was turned down because of her age – Union Army Nurses had to be at least 30 and there were few exceptions made. Census records show her to have no occupation in 1865 and 1870, living in her parents’ household. Although we can assume someone with as much energy and intelligence as Kate was most likely devoting her time to any number of social causes, including suffrage.

In 1876, Judith Winsor Smith recommended her niece, then 32 years old, to the position of clerk at the Woman’s Journal in Boston, a job recently vacated by Sarah Weld, the daughter of abolitionist Angelina Grimke. The Woman’s Journal had been founded in 1870 by suffragists Lucy Stone and her husband, Henry Blackwell. Former Duxbury resident, Mary Livermore, was also instrumental in its beginnings. Once hired, Kate embarked on a life-long career in publishing. She stayed with the Woman’s Journal, rising to the rank of associate editor, for 30 years. She was responsible for a column called “Comers and Goers,” wrote book reviews and helped steer the content of the journal. 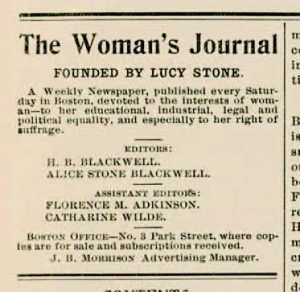 She became increasingly involved in the suffrage movement, serving for a time as the Treasurer of the Boston Women’s Suffrage League. She was also a member of the Pentagon Club, whose membership was made up exclusively of women in the five professions of medicine, law, journalism, teaching and religion. Her social circle included not only social reformers Lucy Stone and Henry Blackwell, but also their daughter, Lucy Stone Blackwell, and Julia Ward Howe. It was Howe who dubbed Kate “dear Wilde child.”

After her retirement, Kate continued to live in Boston and began to relax a bit after years of labor. Judith Winsor Smith wrote in 1911, “Kate is enjoying her retirement more than I thought she could. I invited her to two afternoon occasions this winter, which I had tickets for. For thirty years she could not have accepted them, and I hope she will have many such opportunities.” Lucy Wilde, Kate’s younger sister, often resided with her, and she spent vacations in New Hampshire. Sadly, after decades of fighting for the women’s right to vote, Catherine Wilde died in 1917 – just three years shy of casting her own ballot.

2020 marks the 100th anniversary (the centennial) of the 19th amendment, which granted women the constitutional right to vote.