Reynolds-Maxwell Garden Gets a New Look! 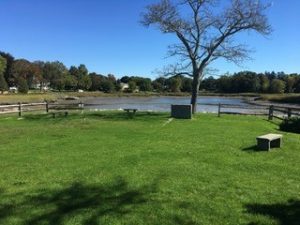 The beautiful Reynolds-Maxwell Garden sits on Washington Street, near the Bluefish River bridge and is a popular spot for enjoying the water. It is open to the public year round and is an iconic spot for the community of Duxbury.

In the early-mid 19th century, this area of the Blue Fish River was thriving with shipyards, wharves, sawpits, mills and warehouses. By 1900, Duxbury Village, as it was known then, was Duxbury’s main commercial district and at this location stood livery stables, a garage, grocery store, restaurant, and a barber shop, among other establishments. In 1906, Tony Lucas built his house on the property that is today the Reynolds-Maxwell Garden. An immigrant from Portugal, Lucas and his wife Rebecca ran a barbershop and grocery store out of the building on the Blue Fish River.

In 2018, the DRHS embarked on a major restoration project to restore and raise the sea wall at Maxwell Garden, preventing damage from wash over during high tides and storms. This project was made possible through the generous bequest of Mary Reynolds and, with the Garden Club’s blessing, the garden was renamed the Reynolds-Maxwell Garden. A large interpretive panel filled with history and images was installed on the property by the DRHS Lands Committee for the enjoyment of visitors to the property.

In 2020, a dedicated group of volunteers from the DRHS and The Duxbury Garden Club came together to create a new vision for the Reynolds-Maxwell Garden. Pooling the resources of both organizations, they have developed a new future for the garden as a “pocket park” with new, salt- tolerant plantings and the addition of luxurious Adirondack chairs for full appreciation of the view.

The Duxbury Garden Club voted to make a financial donation to support purchase of new plantings.* The chairs were generously donated by Mary & Merle Ott, Woody & Sam Lawson, Susie & Nick Bates, and Ashley & Morgan Mohrman. Additional volunteers contributing to this planning group included Jayne Talmage O’Farrell and Shirley Jenkins. Shirley, a longtime DRHS & DGC member, is also a certified landscape designer who has donated her time & talents for drawings and plant selections for the garden. A re-dedication ceremony scheduled for June 2020 will be rescheduled when health considerations allow.

A special thank you to the Duxbury Garden Club for their long standing partnership at this property. Together, we all preserve and make accessible this important Duxbury resource.

*The Duxbury Garden Club also voted additional financial resources to support new plantings and rebuilding stone walls at the King Caesar House, another DRHS property. Thank you to this most generous community group!