For the past 13 years, as part of an ongoing collaboration with the Duxbury Free Library, the DRHS’s Textiles & Historic Clothing Committee has presented gallery talks and collection items for public enjoyment and education. In lieu of our live events, committee members Kris Gaskins and Madelon Ali will present highlights from past exhibits online, so that they can continue to share their work, and the DRHS’s treasures. Thank you Kris and Mattie! 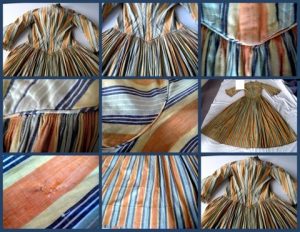 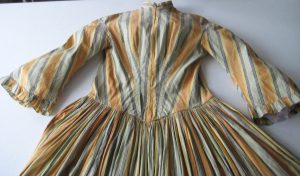 Zilpah Antoinette Knowles, born January 20, 1837, is known to us through genealogical records, photographs, and articles of clothing she wore. Known as “Nettie” to friends, she was the daughter of Samuel and Lucia Ann (Sampson) Knowles. She spent her entire life in Duxbury, and was a student at Partridge Academy in 1846 when she signed two quilt squares we now have in our collection.

On January 30, 1862, Antoinette married George Frederick Tileston, a reporter who was born in Boston in 1828. Shortly afterward, he went off to war as a Lieutenant Colonel in Company S; 11th Massachusetts Infantry. He was one of the casualties the Union troops suffered on August 29, 1862 at Second Bull Run in Virginia. In October of that year, Antoinette gave birth to their daughter, Georgiana Tileston. She and “Georgie” continued to live with Antoinette’s parents. Sadly, Georgie lived only until 1882. Antoinette died of pneumonia on February 11, 1899.

Antoinette’s cousin (Lloyd Granville Sampson, Jr.) married Margaret A. Sampson. Their daughter was Margie S. Sampson, who donated many objects to the DRHS including this dress.

The dress is a good example of a special occasion dress worn for church or other community social events in a small town like Duxbury. It is a very colorful cotton striped textile, likely manufactured in New England, possibly from cotton grown in the southern United States. More sumptuous fabrics like silks and velvets were available here in Duxbury, imported from France or England to Boston, and brought here by packet boat to The Ford Store on Tremont Street (1826-1920). However, not all families may have chosen them, having a less glamorous and high style way of life.

The colors of the stripes in the dress are blue, orange, green and yellow, popular colors in the mid-19th century. A similar color palette is used in surviving wallpaper from the period, at the King Caesar House Museum, a property of the DRHS.

Upon examination of this dress, using the accompanying photos, dressmaking details such as the cording around the arm scye (where the sleeve joins the bodice), and at the waist seam can be seen. These details are the skills that were practiced by a dressmaker.  Our research indicates that there were about 7 dressmakers, and 8 seamstresses available for women in the Ford Store area of Millbrook, that could produce special features like this in a dress.

This dress is an important example of a dress worn in Duxbury by several women: the inside waistband tape documents clearly “this dress belongs to Antoinette Knowles”. Her cousin, Margie Sampson, also wore this dress. There is evidence of a very deep hem having been altered for a smaller person, perhaps Antoinette at about age 10, as she would have been in 1846. The forensic nature of our work with the historic clothing at Duxbury Rural and Historical Society (DRHS) is fascinating.

The dress retains its vibrance to this day, although there is deterioration of some of the seams where the quality of the thread did not hold up as well as the dress textile. The dress has been exhibited several times, but will no longer be shown until conservation can be accomplished, as we are reluctant to further stress the delicate seams.[/vc_column_text][/vc_column][/vc_row]