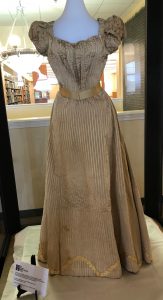 For the past 13 years, as part of an ongoing collaboration with the Duxbury Free Library, the DRHS’s Historic Clothing & Textiles Committee has presented collection items in the display case on the second floor of the library. These exhibits are usually accompanied by in-person gallery talks on the first Friday they are up. In lieu of our live events, committee chairs Kris Gaskins and Madelon Ali will present highlights from past exhibits online, so that they can continue to share their work, and the DRHS’s treasures, during this difficult time. Thank you Kris and Mattie!

From the archives: “Dress was worn by women who lived in Duxbury; owned by one of three sisters – Laura (Joan’s grandmother), Helen or Anna Elms. Parents Edward & Anna Balch Coffin Elms (6/18/1867 – 6/3/1918) built a summer home at 321 King Caesar Rd. Laura Elms married Edward Benedict, whose father William had a house on King Caesar Rd, last house on right before the bridge.”

I have missed seeing everyone for the Threads of Duxbury’s Past Gallery Talks at the Duxbury Free Library.  As a reminder of those happy times, I will be including an E-Threads offering to be posted on the DRHS website.

In the 13 years of exhibiting the historic clothing in the Duxbury Rural and Historical Society collections, we have had many “encounters”, thus the title!

We have encountered “mysteries”; a part of a skirt may be missing or damaged, sleeves torn, or misaligned, patches sewn on in a skilled (or not) manner many times, or just large ugly stains.  When a dress is on a hanger or lying flat in an acid-free box, the damaged parts are not immediately visible.  We have become accustomed to tucking the damaged part under a fold or use other artifice that makes the piece presentable.  In some instances we have had to use our various seamstress skills.  However, there have been occasions when we just abandoned our original plan and used a different piece.

In the case of the gold silk dress pictured, we accepted it from the donor, Joan Lincoln, in four pieces: the bodice, collar pieces, a loose gore and a large satin sash.  We discovered that the dress had been altered, as many to most of our dresses have been, and the collar alone was comprised of four pieces all tightly sewn together.  This dress was originally made between 1860 and 1880.  The donor was uncertain as to the exact time period, but on consultation with our own library of historic clothing print sources, online sources and our own experience of being “detectives” of historic clothing, our clues pointed to a bodice style that was made around 1860.  The trim detail suggested that it was added in a later period, the 1880s.

We spent a great deal of time deciding whether to use the large and beautiful gold satin sash, which was clearly not original to the dress.  Much debate among four of the group ensued, and we did use it to good effect, I feel, but it is not actually authentic to the original dress design.