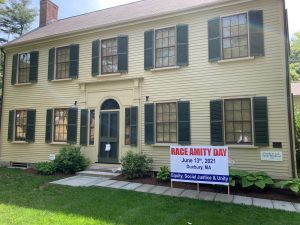 Race Amity, the friendships and collaboration between people of different races and cultures, has been annually observed in Massachusetts since 2016 when Governor Baker signed into law an act proclaiming the second Sunday in June to forever be “Race Amity Day” and “urged all citizens of the commonwealth to take cognizance of this event and participate fittingly in its observance.” This year’s observance takes place on June 13, 2021.

There will be no local observances of Race Amity Day, but during the month of June, please visit the grounds of the Bradford House Museum at 931 Tremont Street, where a Race Amity Day banner is installed and welcomes your thoughts and your signature.

The Bradford House Museum is particularly noted as a place that welcomed conversation, thoughts, education and social justice. The Bradford family was involved in major social movements of the 19th century, including anti-slavery. Their home welcomed dozens of visitors who sought social justice and change, some of whom were well-known, including Charles Burleigh, Abby Kelley Foster, and Charles Lenox Remond. Learn More about the Bradford House at Our Website.

The National Center for Race Amity (NCRA) develops forums and initiatives to advance cross-racial and cross-cultural amity that impact the public discourse on race. The NCRA overall mission has the cultivation of race amity as its key tool as well as its end goal in advancing access, equity, social justice and unity. Learn more: https://raceamity.org/

« “Ezra and the Mouse: The Search for Lafayette,” by Victoria J. Coe
Volunteer Highlight: Madeline DiPalma and Maya Stahl »