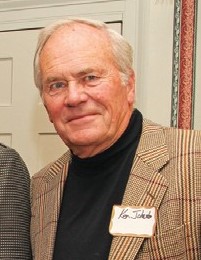 Ken was a friend to DRHS. It is a simple statement but one that cannot fully encompass the relationship that DRHS has enjoyed with both Ken and Marta Johnston over many years. 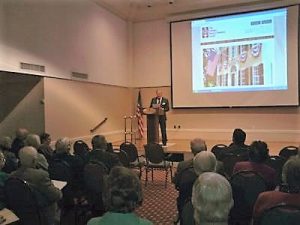 Ken would go on to serve as DRHS Board President for two full terms from 2006-2012, and during these years he oversaw some of the biggest changes in DRHS history, including the establishment of the Drew Archival Library in 2006. He was also an important voice on the DRHS Investment Committee, utilizing his professional experience to steward this precious asset and to ensure that the DRHS could continue to grow. He and Marta were donors to the DRHS Collections and to Conservation Projects as well, including the conservation in 2010 of the DRHS document signed by Presidents Jefferson and Madison. 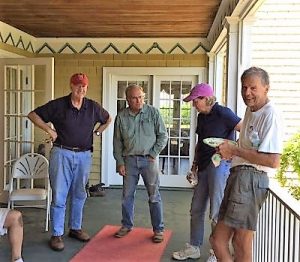 In recent years, Ken and Marta were hands-on at DRHS properties, helping in Clean Up Days and in re-establishing gardens at King Caesar, including the new Friendship Garden. They donated labor and materials for these gardens, and in 2018, the Johnstons donated the funds necessary to install irrigation systems at King Caesar, a crucial step towards beautifying the property.

I always loved seeing Ken’s big smile at DRHS events. Ken’s friendly banter at Investment Committee meetings combined with his deep knowledge of the industry as he continued in this important work for DRHS. And of course, it was a pleasure to meet him on the grounds of King Caesar House as he worked in our gardens. But what I will always cherish is the memory of his starring role as Judah Alden in our original play, How King Caesar Got His Nickname. His performance was stellar, and his willingness to take on such a project for DRHS (not just once, but twice!) showed that he was ever the best of sorts.

From DRHS to Ken…we will miss you. The DRHS is in good hands; you left us that way.

Thank you for everything. To Marta and the Johnston family, your friends at the DRHS are thinking of you all right now and we will continue to honor Ken’s memory.