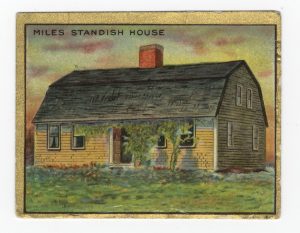 Cigarette cards began being printed in the late 19th century and stayed popular until the around WWII when manufacturing priorities took over. This card was part of the “Historic Home Series” by Helmar Turkish Cigarettes, one of the most popular Turkish and Egyptian cigarette brands of the early 20th century. Each card featured a historic house with background information printed on each card.

This house was purported for years to have been built by Alexander Standish (1626–1702), son of Myles Standish, in 1666. For souvenirs, it was primarily marketed, however, as the Myles Standish House or simply the Standish House. The land it sits on, at 341 Standish Street, is part of the original land grant that was owned by Myles Standish, but architectural elements suggest that it is closer to a mid-18th century house. A Boston entrepreneur, Stephen Allen, purchased the property in 1870 and envisioned an elaborate summer resort community to go along with the building of the Myles Standish Monument. He was assumed to be the one that painted “1666” on the chimney and claimed the home had been built by a Standish.

Related Object: Souvenir card from the America We Love Series, circa 1950, Ink on paper, Gift of the Duxbury Free Public Library, DAL.SMS.090.022.