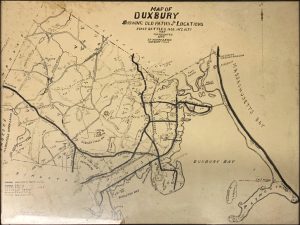 This is a copy of the original hand drawn map of Duxbury that was created by Henry Fish in 1924. It was reproduced as a foldout in his booklet, Duxbury Ancient and Modern. The map shows the locations of the original homes of the Pilgrims and other early inhabitants of Duxbury.

Henry A. Fish (1854-1926) came to Duxbury in the late 19th century to work on the Old Colony Railroad. He became the tree and caterpillar warden for the town of Duxbury and, as such, trekked through many miles of the town. He became fascinated with the earliest settlers of Duxbury and meticulously researched the location of their land grants. In 1924 he published a pamphlet and map to be sold at the train depot to those visiting Duxbury. A revised edition was published in 2012 to commemorate the 375th anniversary of Duxbury. For more information on the Mayflower families that settled in Duxbury, please see this page. 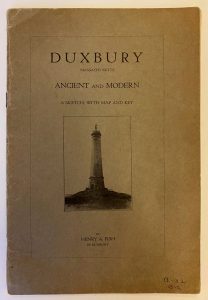 An early printing of Fish’s Duxbury Ancient and Modern, it originally sold for $1.00 to tourists coming to Duxbury and helped cover the costs of Fish’s household expenses after retiring.

Go to Next Section: Lasting Legacy