Lasting Legacy: Duxbury never forgot its Pilgrim origins. How could it? The name Duxbury itself is most likely derived from the Standish family’s manor in England, Duxborough Hall. For generations after its founding in 1637, the town’s small population still held many Mayflower surnames, including Standish, Alden, Brewster, Soule and Bradford.

But soon, newcomers married into the original families, making Wadsworths and Winsors as much Pilgrim descendants as the Aldens and Bradfords. With these lineages came the efforts to remember their Pilgrim ancestors, appropriating their names for ships, clubs, bands, streets, schools, and more. That legacy continues today with students attending Alden School, people living on Standish Shore, visiting the Mayflower Cemetery, attending services at Pilgrim Church, and holding picnics at Clark’s Island.

The 400th anniversary of the arrival of the ship Mayflower is yet another example of the enduring legacy of the Pilgrim forefathers and mothers in Duxbury. As millions of Mayflower descendants and members of Kindred Societies around the country mark 2020 as a seminal year in their family trees, many look to Duxbury as one of the first places their ancestors called home on the North American continent.

The 400th anniversary has also been an opportunity to appreciate the complexity and pain felt by the Wampanoag and other Native American groups as the anniversary has approached. You can see one project addressing this topic here: “OUR” STORY: 400 Years of Wampanoag History.

Together, with many voices and experiences, we are all recipients and heirs to Duxbury’s Pilgrim legacy.

Click the buttons to explore different parts of the town’s Pilgrim past and to view objects from the collections of the Duxbury Rural & Historical Society. 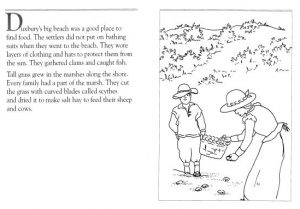 As a special gift, please enjoy and download these free themed coloring pages for the school-aged learners in your life!

Please consider making a donation to support the Duxbury Rural & Historical Society & community projects like this exhibition. We depend on your support, now more than ever. Thank you.

The quest for archaeological evidence of Duxbury’s Pilgrim past began with an 1833 dig, one of the earliest in U.S. history.