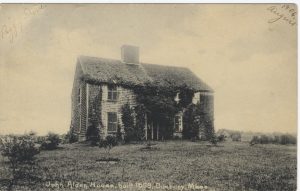 This postcard, showing the exterior of the John Alden House is addressed to Miss Ruth Hamilton, in Shelburne, Nova Scotia.

The Alden House is located at 105 Alden Street in Duxbury, on land granted to John and Priscilla Alden. Family tradition held that the house was the second house on the site built by them in 1653. In 2003, dendrochronological and architectural analysis of the structure suggests that it was built c. 1700 by the children and grandchildren of John and Priscilla. 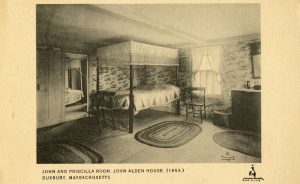 This image is taken of a bedroom inside the John Alden House in Duxbury. The house was purchased by the Alden Kindred in 1907 and began operating as a historic house museum in the 1960s. Descendants, or those belonging to the Alden Kindred, could visit the house as early as 1920 when it was managed by Charles L. Alden, however the house had been a popular tourist attraction for many years prior.