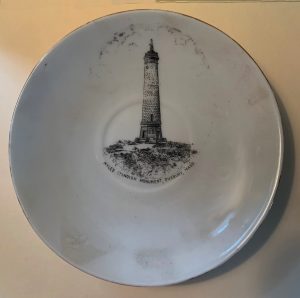 White plate with an image of the Myles Standish Monument, circa 1900
Austria
Ceramic
Gift of Glen Traquair, 2019.106.002

White souvenir plate of the “Myles Standish Monument, Duxbury, Mass.” The plate was made in Austria for sale by N.M. Stetson’s pharmacy located on Washington Street in Duxbury.

Nelson Mitchell Stetson (1855-1907) was born in Scituate, MA and become a pharmacist shortly before opening the Duxbury Pharmacy in 1897. It was located at 590 Washington Street, opposite the post office at the time. The Stetson family lived on the second floor of the building. In addition to filling prescriptions, the pharmacy also sold toiletries, cigars, souvenirs and had a counter for ice cream. Shortly after opening, Stetson took on an employee, Paul C. Peterson, who became the owner in 1907.