A New Head and Shoulders for Miles Standish Statue 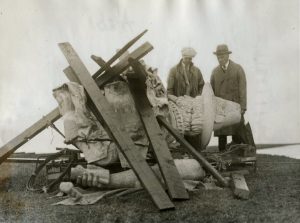 Photograph depicting the reconstructed head and shoulders of the Myles Standish Monument about to be hoisted to the top, 1926. The head and shoulders could not be supported by the damaged legs (from lightning strike in 1922) so it had to be brought back down. New legs were carved, and an almost entirely new statue stands today atop the shaft. 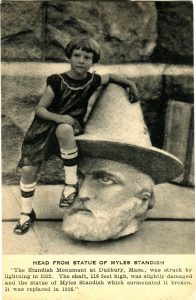 This postcard features a small child sitting atop the original head of the Myles Standish Monument statue. This photo was taken in 1922 though created into a postcard for sale after the new statue was erected.