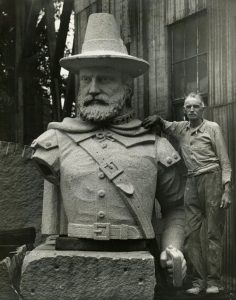 Press photograph from Boston Herald, published July 1930 with the caption “Capt. Myles Standish statue and sculptor John Horrigan pose for the camera before the giant form was sent aloft in original place in Duxbury. Statue was hit by lightning in 1930 but suffered no ill-effects.”

The monument was actually hit by lightning on August 26, 1922 and was heavily damaged, thus the need for a new portion of the statue to be fashioned by Horrigan.