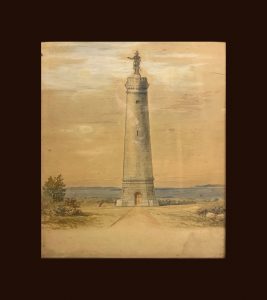 Pastel painting of the Myles Standish Monument. The octagonal base of the monument has two important elements. The arched entrance to the interior is made up of a stone from each state in New England, with the keystone, donated by President Ulysses S. Grant, representing the US. A course of stones near the top of the base represents each of the Massachusetts counties.

In recent years, American monuments of the late 19th and early 20th century have drawn critical attention. Although installed with various subject matter, the monuments were all installed at a time of unrest in the nation’s history, when America was experiencing an influx of immigration, changing laws and changing demographics. Monuments were meant to inspire in some cases, but also to help maintain the status quo and hegemonic systems, in others. Then, as ever now, history has been intertwined with contemporary identity. 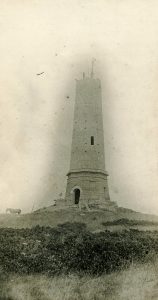 This photograph taken during the monument’s construction in 1889 and shows three men atop the unfinished tower. Balanced precariously on his ladder is Edwin Forrest Loring. The camera’s angle was wide enough to capture their work horse more than 80 feet below. This is one of the only images of the monument in a state of construction. You can discern the different sized granite blocks used on the upper portion of the shaft that mark where building had stopped 14 years earlier. Despite the progress made in 1889, it would take another decade before the monument was fully completed and opened to the public.