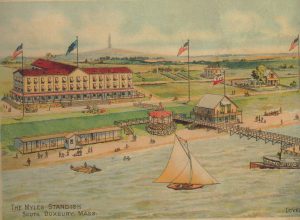 In 1871, a group of Boston entrepreneurs formed the Standish Shore Company and built a hotel known as the Standish House, later known as the Myles Standish Hotel. They also laid out plans for a large development of cottages around the hotel, only a portion of which came to fruition. The hotel, however, was tremendously popular, attracting visitors from Boston, New York and beyond. The hotel featured a golf course, daily concerts, weekly balls, and hosted regattas. 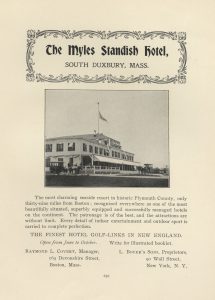 This advertisement was in A Trip Around Cape Cod: The South Shore and Historical Plymouth published in 1898 and written by Ezra G. Perry, who had a home on Depot St. The ad mentions that the hotel includes one of “the finest hotel golf-links in New England.” The proprietors listed, L. Boyer & Sons, took control of the hotel in 1894 and began attracting New Yorkers as well as Bostonians to their thriving seaside oasis. 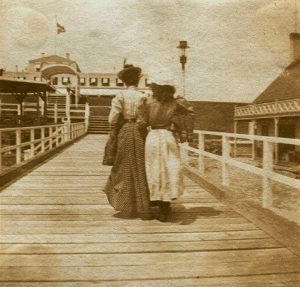 This photograph is from a scrapbook owned by Edith Gay Bittinger (1874-1970) who spent a summer on Standish Shore at 241 Marshall St. (then called Columbus Ave.) in Duxbury with friends from Ratcliffe College. This photo shows two girls arm and arm walking up the 400’ pier toward the Myles Standish Hotel, with the famed spring on the left and the Duxbury Yacht Club on the right.  Edith would go on to marry Charles Bittinger in 1904 and eventually live in the Gamaliel Bradford House on Tremont St.