Menu of the Myles Standish Hotel 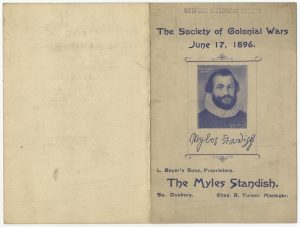 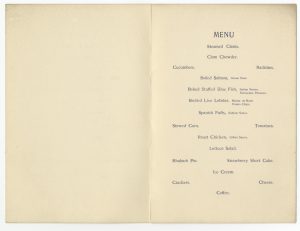 This menu was provided for an event held by The Society of Colonial Wars at the Myles Standish Hotel. The proprietors at the time of this event, L. Boyer & Sons, seeded clams on flats in Duxbury Bay to constantly supply their dining room, seen here in both their steamed and chowder versions.

The Society of Colonial Wars was a fairly new society at the time, founded in 1892. The Society still exists today largely with the same qualifications for members, those who are lineally descendant from a person who served either in a military capacity or held public office in one of the original 13 colonies prior to the American Revolution.

In 1871, a group of Boston entrepreneurs formed the Standish Shore Company and built a hotel known as the Standish House, later known as the Myles Standish Hotel. They also laid out plans for a large development of cottages around the hotel, only a portion of which came to fruition. The hotel, however, was tremendously popular, attracting visitors from Boston, New York and beyond. The hotel featured a golf course, daily concerts, weekly balls, and hosted regattas. The hotel suffered a fire in 1908 and ultimately closed its doors in 1912. 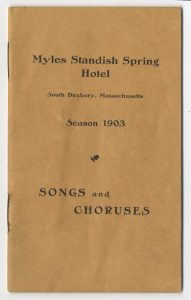 This songbook was published during the 1903 season of the Myles Standish Hotel. It features a number of American patriotic songs, well-known Civil War era songs, and other contemporary music popular at the time. Guests were encouraged to sing along using these songbooks, and concerts were typical during the summer.