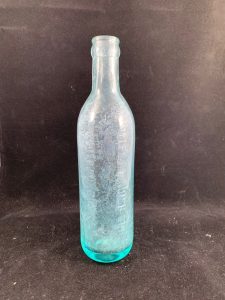 A glass bottle from the Standish Spring in South Duxbury. The Myles Standish Hotel capitalized on the Standish name by bottling local spring water and selling it nationwide, later introducing lines of ginger ale and lemon soda. In an 1898 publication by Ezra Perry, A Trip Around Cape Cod, the Spring is mentioned in conjunction with local historical Plymouth hotspots. Perry noted that the water is “second to none, if not superior to any waters in the world, and is endorsed by the MEDICAL FACULTY AND THE PUBLIC as an absolutely pure and perfect water, and remarkable for its solvent properties.”

In 1871, a group of Boston entrepreneurs formed the Standish Shore Company and built a hotel known as the Standish House, later known as the Myles Standish Hotel. They also laid out plans for a large development of cottages around the hotel, only a portion of which came to fruition. The hotel, however, was tremendously popular, attracting visitors from Boston, New York and beyond. The hotel featured a golf course, daily concerts, weekly balls, and hosted regattas. The hotel suffered a fire in 1908 and ultimately closed its doors in 1912. 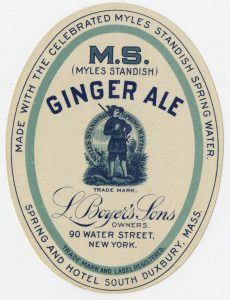 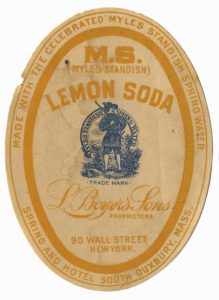