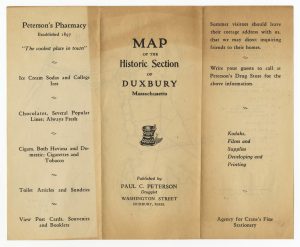 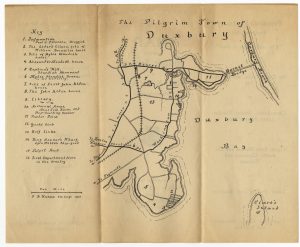 This map from Peterson’s Pharmacy advertises his business as well as showing tourists and summer residents where a number of historical sites are located around town. The map was designed by F.B. Knapp, then proprietor of the Powder Point School for Boys that operated as a hotel during the summer months.

Paul Chester Peterson (1883-1950) was born and raised in Duxbury. He became a clerk at the pharmacy of Nathan Stetson, eventually buying the firm, in 1907. As a pharmacist, Paul C. Peterson was an entrepreneur, he initiated a mail delivery for his customers, sold post cards and maps of Duxbury, and imported souvenir pottery. See examples of this type of souvenir pottery in Collecting in a Pilgrim Town.