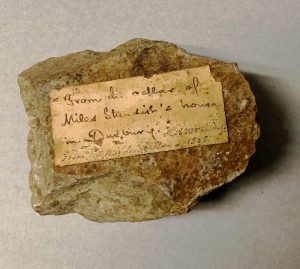 Stone excavated during the James Hall dig of the Captain Myles and Barbara Myles Standish homesite in 1856. This was most likely part of the Standish home foundation. A faded paper note glued to rock reads: ” From the Cellar of the Myles Standish house in Duxbury. His writing. From Mr. H. W. Longfellow, 1865.” 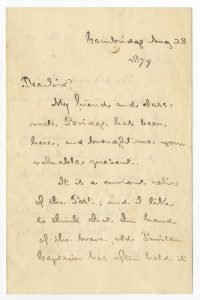 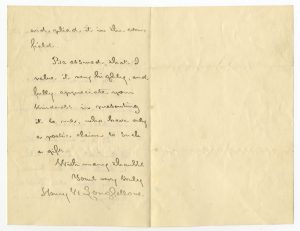 The transcription of the letter reads:

My friend and classmate, Bridge, has been here, and brought me your valuable present.

It is a curious relic of the Past; and I like to think that the hand of the brave, old Puritan Captain has often held it and plied it in the cornfield.

Be assured that I value it very highly and fully appreciate your kindness in presenting it to me, who have only a poetic claim to such a gift.

With many thanks, Yours very kindly,
Henry Wadsworth Longfellow