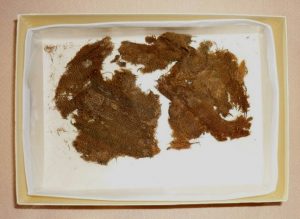 The fragments of wool were recovered from the grave of Myles Standish who was buried in Duxbury’s Old Burying Ground in 1656.

Rev. Huiginn, who organized the 1891 exhumation, wrote in his book The Grave of Myles Standish and Other Pilgrims,

The account of the donor was that the fragments were part of the winding cloth or shroud, which would have been used to prepare the body for burial. In 2012, the fragments were treated and rehoused by a professional Textiles Conservator, who concluded that while the cloth dates to the period of 1656, likely it was part of some wool clothing, and not a burial linen. 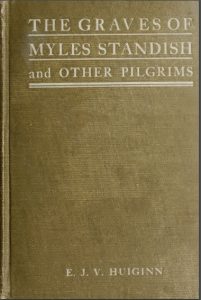 Rev. Eugene J. V. Huiginn (1860-1927) was the minister of St. John the Evangelist Episcopal Church in Duxbury from 1890-1892. He was fascinated with Pilgrim history and led the second dig at the grave of Myles Standish on April 25, 1891. This book describes his research and conclusions before and after locating the grave.