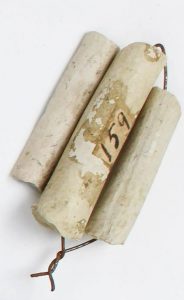 Pipe stems excavated at the homesite of Captain Myles and Barbara Standish by Reverend Benjamin Kent in 1832. The sticker “159” correlates with Kent’s handwritten “museum” list that reads “159 Pipe stems – the Capt and Hobamock were loving smokers.” Hobamock was a Wampanoag that was a close friend of Captain Standish and lived in Plymouth Colony for some time. These pipe stems were handed down through the Kent family before being acquired by the Duxbury Rural and Historical Society in 2020.

In 1832, Reverend Benjamin Kent, the minister at Duxbury’s First Parish Church, conducted a rudimentary archaeological dig at the site of the Myles Standish homestead. He found a number of items which he displayed at his own, small museum of curiosities. 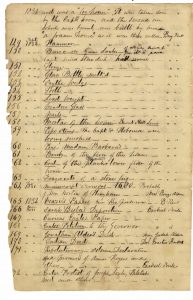