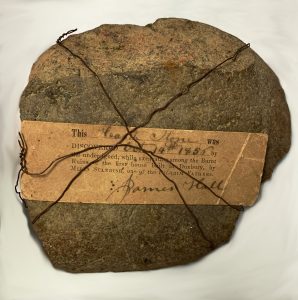 Stone excavated during the James Hall dig of the Myles Standish homesite in 1865. It was likely part of the Standish hearth. Note attached with wire to the stone reads: “This hearth stone was discovered October 14, 1865 by the undersigned, while excavating among the burnt ruins of the first house built in Duxbury, by Myles Standish, one of the Pilgrim fathers.” Signed: James Hall.