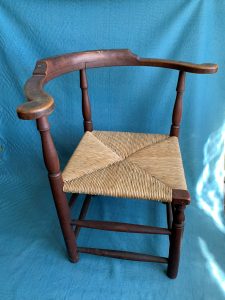 This corner, or roundabout, chair, came from the home of Samuel Alden (1688-1781), the grandson of Pilgrims John and Priscilla (Mullins) Alden. According to Bradford family lore,  it was saved from destruction by Samuel’s own grandson, Capt. Gershom Bradford. Once repaired, it became Bradford’s favorite chair. It was prominently displayed at the Bradford House (a museum property now owned by DRHS) until 1893 when it was willed to Lucia Alden Knapp and taken to her Plymouth home. It was returned to the Bradford House in 1952.

For many years, the chair was believed to have been owned by David Alden (1632-1719), the youngest son of John and Priscilla (Mullins) Alden. From what we know now, however, corner chairs didn’t become popular in the Americas until the mid-18th century. It is unlikely this chair was created during David Alden’s lifetime and was instead was originally owned by his son, Samuel Alden. The possibly false origin story of this chair illuminates the desire to own objects closely associated with the Pilgrims.