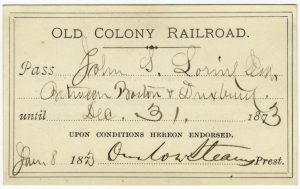 This ticket entitled John S. Loring passage on the Old Colony Railroad from Boston to Duxbury for the year 1873. The Old Colony Railroad got its name from Plymouth Colony, referred to colloquially as “the old colony” after Plymouth became incorporated into Massachusetts Bay Colony in 1692. It operated independently from 1845 to 1893 and serviced most of southeastern Massachusetts and some parts of Rhode Island. Beginning in 1871, there were three stops in Duxbury, at Millbrook, Island Creek and South Duxbury. Today former Old Colony lines have been reopened to passenger service, including the MBTA’s Old Colony Lines with service from Boston to Plymouth and Middleborough/Lakeville. 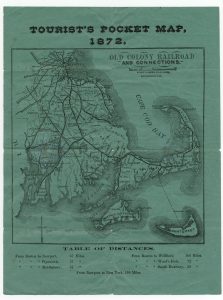 Before the era of the automobile, trains brought the majority of the tourists and summer residents to Duxbury. This map, offered freely by the train lines, would have been indispensable for people traveling to the South Shore. Notice on the map that there is no connection between Kingston and Duxbury. The Island Creek station that would eventually connect the two towns was not established until 1874.