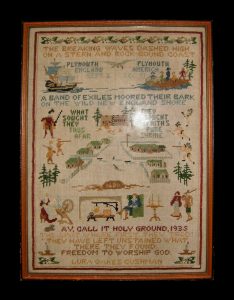 Sampler created by Laura Oakes Cushman in 1935. Cushman’s creation of this sampler in 1935 coincided with the popularization of colonial era styles and the art created by women of the period. The sampler harkens back to those worked by young women in the 17th-19th centuries. It depicts a number of scenes, including Pilgrims, Native Americans, and domestic life. Also embroidered are lines from Felicia Dorothea Heman’s 1825 poem, “Landing of the Pilgrim Fathers”:

The breaking waves dashed high on a stern and rock-bound coast
A band of exiles moored their bark on the wild New England shore
What sought they thus afar
They sought a faith’s pure shrine
Ay, call it Holy Ground
The spot where first they trod
They have left unstained what there they found. Freedom to Worship God.

Laura Oakes Cushman (1895-1988) was an Alden descendant and lived on a property called Eagle Tree Farm that was once part of the Alden’s original land grant in Duxbury.