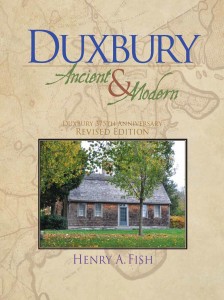 In celebration of Duxbury’s 375th Anniversary, the Duxbury Rural and Historical Society presents an updated and revised edition of a key source on Duxbury’s earliest home sites and by-ways.

In 1924, Henry A. Fish of Duxbury self-published Duxbury Ancient and Modern, a pamphlet and map detailing the locations of Duxbury’s oldest homesteads and roads. Fish worked for the Old Colony Railroad, arriving in Duxbury with his wife Alice in 1881. From 1907 to 1915 Henry Fish was Duxbury’s tree warden, an elected post that required him to traverse the town assessing the condition of trees along streets and in town forests, all the while discovering old pathways and cellar holes of earlier, bygone days.

Fish painstakingly researched the land grants of Duxbury’s original settlers and mapped, as closely as possible, the location of their homesteads as well as the many trails on which they trod.  The vast majority of these vanished colonial sites had been long forgotten. Fish’s research brought to light information available in no other publication of the time and still remains one of our best sources on early Duxbury. The rare, out-of-print publication has become one of the most asked for publications by researchers at the DRHS Drew Archives.

The revised edition of Duxbury Ancient and Modern features both historical and contemporary photographs of many ancient dwellings and includes a completely revised map, based on Fish’s assessments. With a new preface by DRHS Archivist Carolyn Ravenscroft, annotations by Executive Director Patrick Browne, and designed by noted historical publications designer, Norman Forgit, this new publication will be a key addition to your local history library.