Marinda Wadsworth was the daughter of Capt. Ahira Wadsworth and his first wife, Deborah Sprague. She was raised in her family’s home at 338 Washington Street. In 1828 she married Capt. Joshua Drew (1798-1763) and together they had three children. In 1843 Sally Freeman Dawes wrote her husband, “Capt Joshua Drew as took his wife and one child with him, in fact most of the women have gone to sea.” Joshua Drew, at that time, was the captain of E. Weston and Sons ship, Manteo, a merchant ship that primarily brought cotton from New Orleans to Liverpool, England. The child could have been either of the couple’s young daughters, ten-year old Emma or four-year old Flora. Marinda was pregnant on this voyage; son Joshua was born in Alabama.

Capt. Drew died at age 65 in 1860. Marinda lived another 31 years, dying in 1894. She is buried in Mayflower Cemetery, Duxbury, MA. Her sister, Catherine Wadsworth Drew Ford, and sister-in-law, Beulah Holmes Wadsworth, also appear on this list. 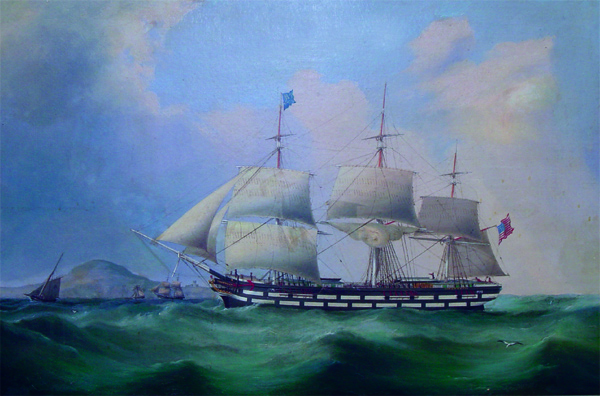